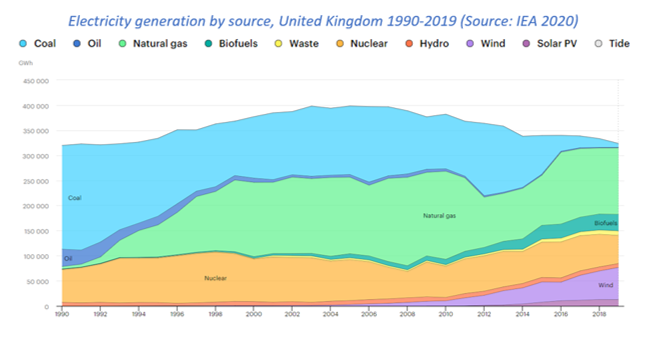 From Charles Dickens to Mary Poppins to Margaret Thatcher, the history and culture of Britain has long been intricately linked to coal. Cheap, plentiful domestic reserves of coal were a foundation of Britain’s global leadership during the Industrial Revolution and the primacy of its Royal Navy on the world’s high seas during the Victorian era.

Little had changed for coal’s place in Britain even as recently as the early 1990s (see chart). The ensuing decade of the 1990s saw a large-scale adoption of natural gas as a new baseload power feedstock. Then, a confluence of factors led to what amounted to a “prequel” to the Energy Transition: more stringent air quality standards, liquification technology which facilitated a global gas market and the widespread adoption of combined cycle turbine technology, among others.

By 2001, natural gas had displaced coal as the primary feedstock for baseload power in the U.K., exposing the domestic power market to international pricing and supply risks for the first time. A second shift in the U.K. power generation market occurred between 2010 and 2020, as the introduction of renewables (particularly wind) marked the effective end of the coal era for Britain.

The trade-off for Britain, however, was that it replaced steady, coal-fired generation with a variable source (wind), which carries inherent intermittency risks. Baseload power in the U.K. would now largely be carried by natural gas, leaving the country extremely vulnerable to global pricing risks.

The solution — admittedly expressed in its most simplistic terms — is rather obvious: the U.K. has an urgent requirement to firm up another source of baseload power to avoid reliance on natural gas.

The timing of Britain’s crisis has a silver lining: it comes in the midst of an inflection year for the energy storage sector. New storage technologies (incorporating smart software with AI), fresh capital and management talent — not to mention a historic surge of confidence — have flowed into the energy storage sector through 2021. Even if not yet ready to be termed “baseload,” energy storage plus renewables have emerged as a viable option for alleviating Britain’s need to cultivate more reliable, domestic sources of power. The sector now holds a ready solution to immediately address both the pricing and intermittency problems which are upending the British economy today.